Little man had his first visit to the dentist last week and although he has lovely clean teeth, she did say that he needed to give up his dummies, as he was starting to get a slight over-bite.
I had been ready for this day, as from the day he was born, I wanted him to have a dummy instead of his thumb or fingers to comfort him, so that eventually he could give them up.
I sucked my thumb when I was little and it was the worst thing trying to stop. In the end I ended up with braces at the age of 10, with prongs in them to help me stop. This brace was followed by train-tracks and head gear, in total 3 years of pain and misery! Something I vowed I would never want my own children to go through.

Kindly the dentist and the dental nurse suggested that I try using the 'dummy fairy' which had worked well for their other clients over the years.
I had vaguely heard of the dummy fairy, but not really as much as the tooth fairy.
This made my little imagination spark and I started to create a little story about a boy who gets visited by the dummy fairy. I looked on google, to check if my idea had already been done and I didn't really find anything that I had been thinking about, so I got cracking!
I have just finished writing it!
Part of the story had a letter from the dummy fairy, so I have re-created it and added more colour to use with my little man tonight! 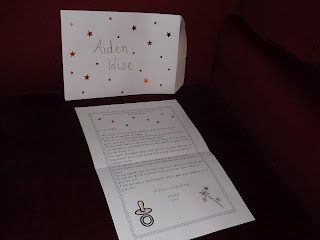 The next few nights will put the story into 'real life' with little man!
Think I'm going to need a lot of prayers for the difficult nights ahead, when little man says goodbye to his beloved 'dodo's'!
Wish us luck!

Posted by cloudy days and moonbeams at 14:15

cloudy days and moonbeams
United Kingdom
I am mum to a gorgeous little man and a beautiful little miss. I love being creative! I make jewellery and cards, try to crochet and sew things and dabble in writing stories and poems. I love watching films and am a huge book-worm!